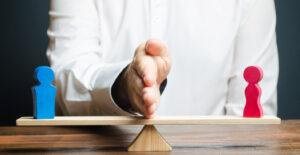 Property division is often one of the most contentious issues in divorce, after child custody. The property that was part of your married life is more than just “stuff.” Most people have emotional attachments to these items and things to consider beyond pure monetary value. Even so, the value is still important, because both parties in a divorce want financial stability entering their new, unmarried lives. That’s why the law attempts to have property division handled in a way that is fair to both parties.

Illinois is an equitable distribution state, which means that courts are directed to divide marital assets “fairly” or “equitably,” but it also means the martial estate is not necessarily divided evenly. One spouse may walk away with more than the other due to a range of factors, such as who has primary child custody and which spouse has a higher earning potential.

You and your spouse can take property division out of the court’s hands (for the most part) by negotiating a property settlement out of court or abiding by a prenuptial or postnuptial agreement that spells out who gets what property. But if the issue goes before a judge, the equitable distribution process applies. It begins with determining which assets should be classified as marital property and which should be considered nonmarital.

Commingled property is usually considered marital property, but it may be possible in some cases to “trace” the assets. For example, if both spouses used that bank account above, which was separate property before marriage, bank statements could be used to trace how much of the money in the account came from the other spouse and how much should still be considered separate property.

It is easy to see how the marital vs. nonmarital property issue can become complex. That is why it’s important for you to have an experienced divorce attorney on your side. The Law Offices of Paul Chatzky in Northfield represents clients in Illinois property division matters. Our attorney can assess your situation and work to ensure your property rights are protected. Call 847-416-1646 or contact us online to schedule a consultation.